Numerical simulations made it possible to quickly and cost-effectively identify and eliminate the cause of excessive deformation to the sleeve.

Simulation of the current state

On the basis of all the data we received (3D model of the product, product material, tool construction and technological parameters), an injection moulding simulation was done using the software package Autodesk Moldflow Insight. It was to serve as a record of the current situation, particularly to match the results of the actual injected product.

In order to obtain the most realistic results, we carried out a complete analysis (cooling, filling and subsequent pressure, rolling and shrinkage), which means that the final product method was used for the entire product (one cavity tool) and the tool together with the valve and tempering system (Figure 2). 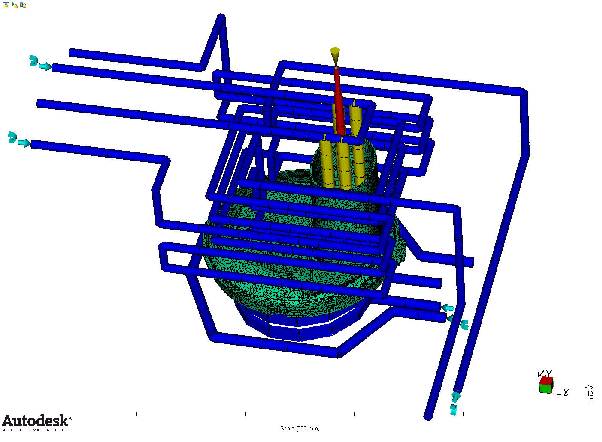 Figure 2: 3D model of the tool

The results showed a complete match with the current state (deformation of the upper part of the sleeve inwards by about 0.87mm (Figure 1 left) and the rise of the cover at the edge by approximately 1.3mm (Figure 1 right) and indicated the cause. Figure 1 left and right show the different possibilities for product deformation. Figure 1 right allows for an easier comparison with the actual product. 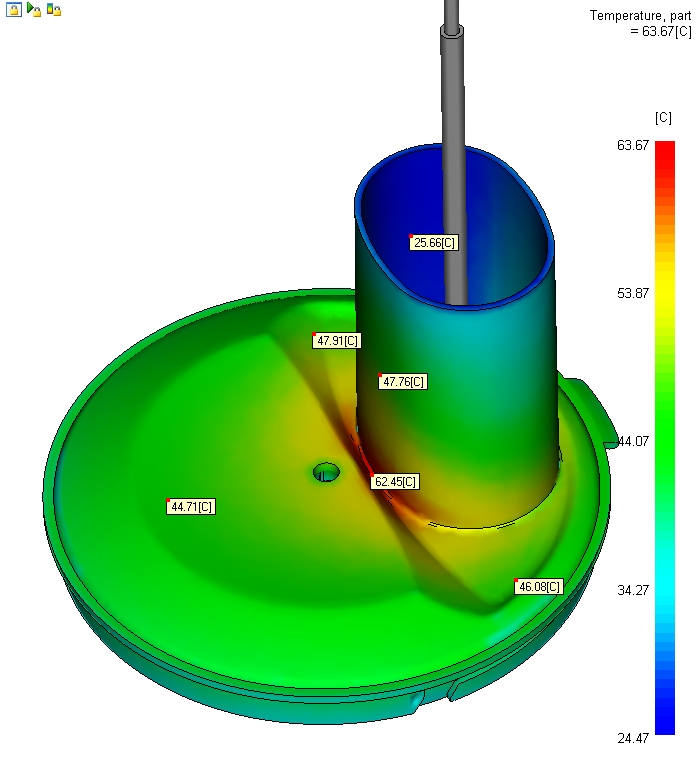 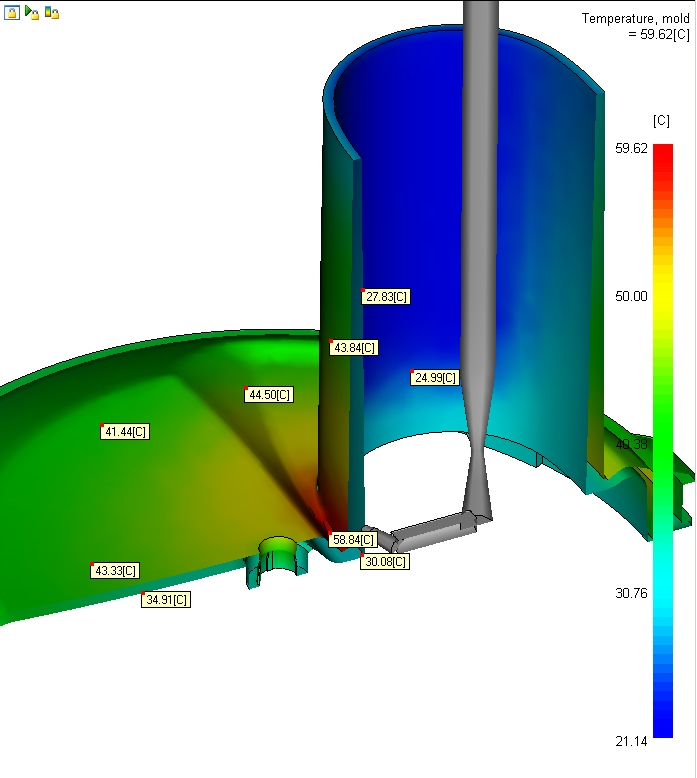 Figure 4: The average temperature of the tool deforms in the direction of the warmer side of the tool due to greater shrinkage caused by the prolonged cooling of the tool mass.

In order to reduce the deformation of the product, the temperature difference at the base needs to be lessened. After discussions with the company and examining the construction documentation of the tools, we decided to manufacture an additional cooling circuit in the tool at the site, which was proved by the analysis to be problematic. Of course, we simulated the possible solution first. 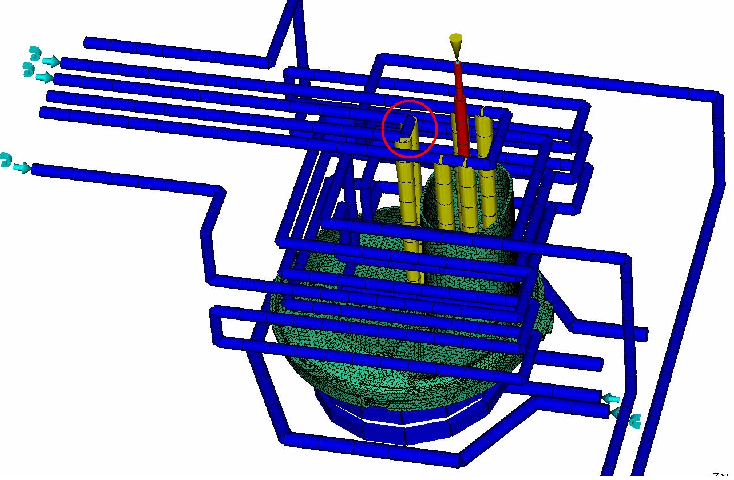 Figure 5: Improvement to cooling the base of the lid

Figure 5 shows the new lines of the tempering system. A classic circuit and a chamber with a barrier were added to the tool. With additional cooling we managed to reduce the temperature difference at the base of the sleeve. The temperature of the product dropped by about 25°C (Figure 6) at the base, and the temperature difference in the base between the injection and the ejection tool was reduced (Figure 7). The results of the simulation showed an improvement in the deformation state (decrease in deformation) by about 50% (Figure 8). Due to these positive improvements, we decided to make the aforementioned corrections to the actual tool. 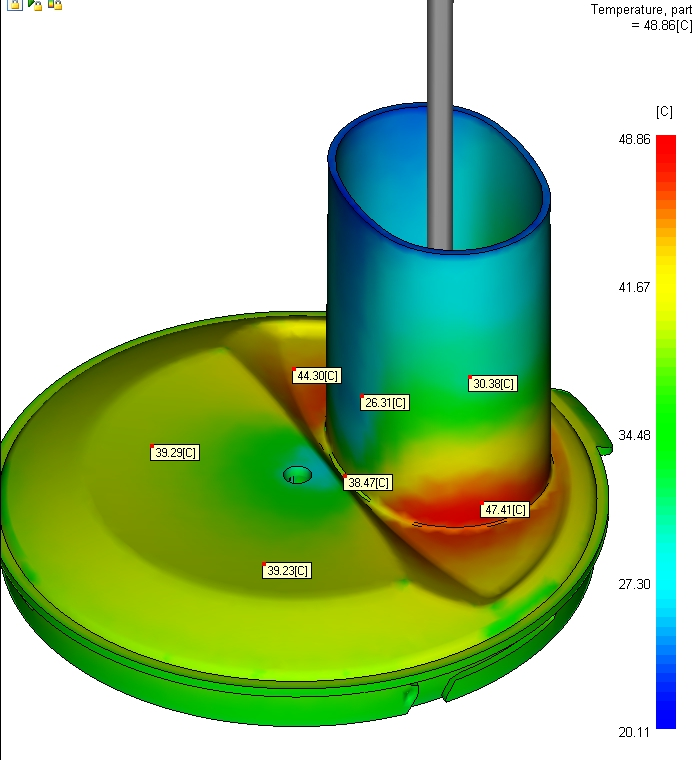 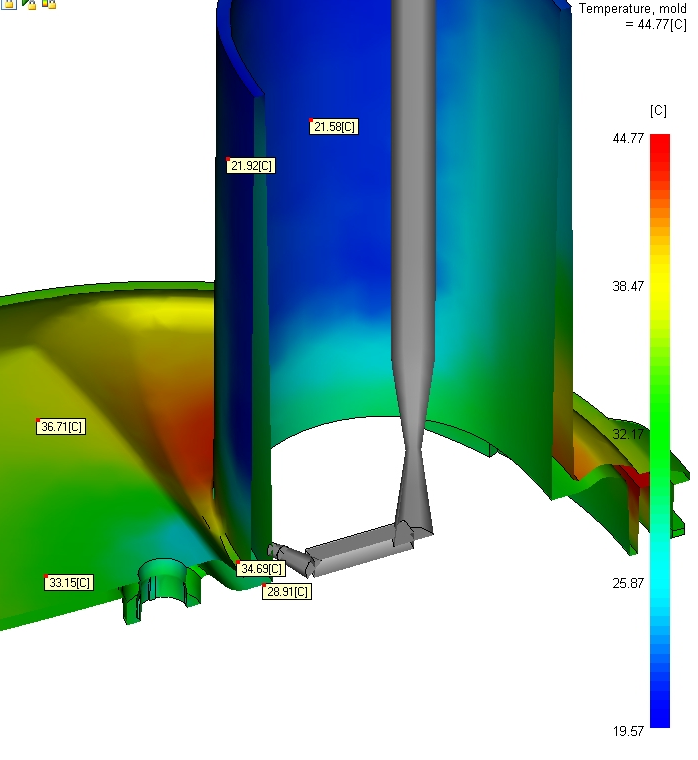 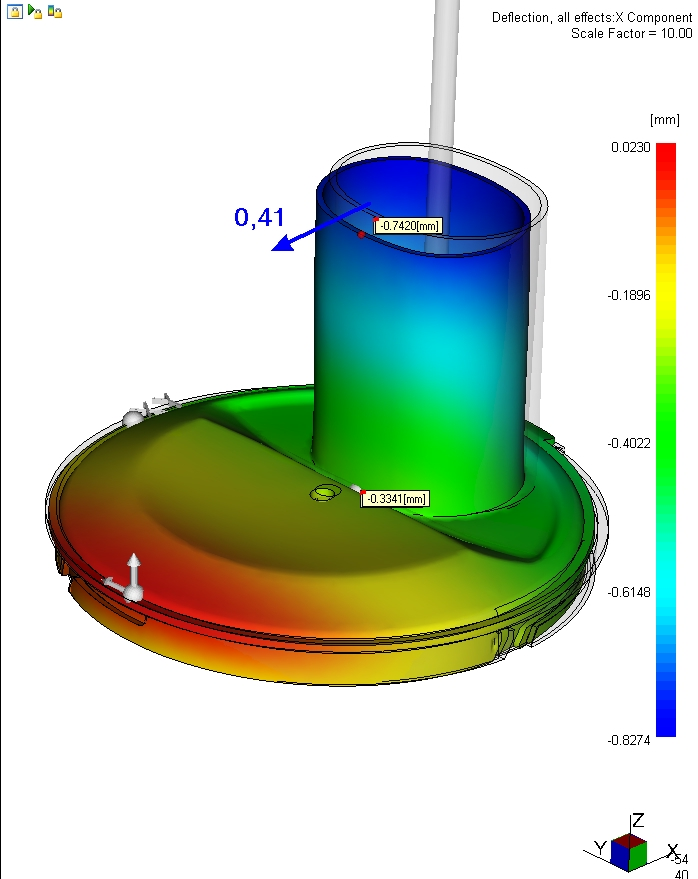 Deformation results for the actual tool

After the changes were made to the tool and the machine tests and the 3D product scan performed, we could confirm the actual decrease in product deformation (Figure 9). The product is now within the stipulated tolerance field, which ensures its functionality.

Numerical simulations made it possible to quickly and cost-effectively identify and eliminate the cause of excessive deformation to the sleeve. After the changes to the tool were made, in accordance with the simulation results, we provided a product within the prescribed tolerance field.

The usefulness of the results of such analyses is highly dependent on the professionalism of the user. The user must be able to correctly interpret the results before judging the causes and making decisions. An inexperienced user can get easily lost in large-scale results, which do not provide us with useful information.

From the partner company

IGOR ŽIBRET, BSH HIŠNI APARATI, d.o.o., NAZARJE: “By using modern technology such as deformation simulation and optical product scanning, and by comparing and analysing the data received, we quickly, efficiently and with minimum costs, resolved the problem of the deformation of the BOSCH MCM4 food processor lid and successfully and on time ran production. Of course modern technology isn’t enough, you need to be able to correctly set up the task, enter the correct boundary conditions, and correctly analyse the data obtained. Here, the experts from Tecos were very helpful. Since we are developing several new projects, I expect our successful cooperation with Tecos to continue in the future.”